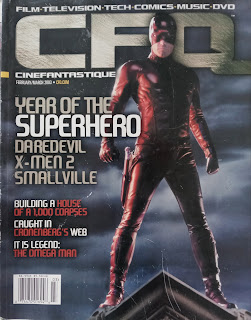 Twenty years ago, Cinefantastique was relaunched with the first issue of the new volume proclaiming 2003 to be the "Year of the Superhero." The soon to be released Daredevil was front and center of CFQ's coverage with news of a multitude of other comic book related projects like X2, Hulk and Smallville also contained within. In early 2003, these projects represented the relatively new superhero trend hitting its stride. In the wake of the success of X-Men in 2000 and Spider-Man in 2002, live action adaptations of superheroes in movies and TV were gathering steam, maybe soon to hit a peak. The general expectation then was this was a fad and inevitably the bubble would burst and popular tastes would move on to something else in time. Cut to today where every year continues to be the Year of the Superhero. 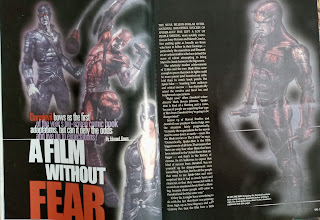 As much as it felt like the dam had finally burst on comic book adaptations, by today's standards 2003 looks like a dribble rather than a deluge. By comparison, in 2022 we had a new Batman movie, Black Adam's debut, and Thor, Black Panther and Doctor Strange sequels and in 2023 we've got third chapters for both Ant-Man and Guardians of the Galaxy, a Captain Marvel sequel that brings together three different Marvels - Carol Danvers (Captain Marvel), Monica Rambeau (Spectrum), and Kamala Khan (Ms. Marvel), a Shazam sequel, a Flash movie (that includes Michael Keaton's Batman!), a Blue Beetle movie, and an Aquaman sequel. And that's not even mentioning all the Disney+ Marvel shows slated to debut this year. Basically we've gotten to the point where it's hard for even hardcore fans to keep up with all of it. 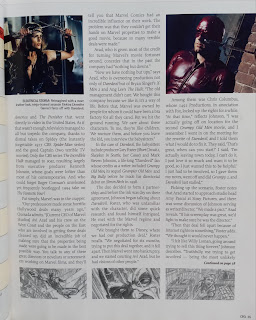 As problems go, this difficulty actually represents cool news for comic book and superhero fans but the bummer is that Cinefantastique and genre publications like it didn't continue to thrive along with the type of movies that they covered (CFQ ceased publication in 2006). Sure, there's still a few magazines on the stands that cover the genre but it's not like it used to be. The idea of relying on print media to get the inside scoop on a movie - never mind reading an exhaustive cover story on one (this issue of CFQ devotes 19 freaking pages to Daredevil) - is an alien concept in 2023. As much as I love where the movies are at, I gotta say I miss the opportunity to read about them in the detailed way that Cinefantastique was devoted to. 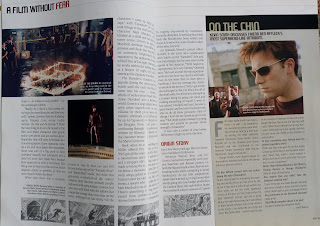 The fact that the rise of the types of films that Cinefantastique covered and celebrated for decades dovetailed with the magazine's own demise as a print entity has a certain poignancy to it. Behind the scenes features on Blu-rays and the Assembled making of docs on Disney+ that have accompanied each new Marvel production since MCU's Phase 4 began have taken the place of the coverage that used to be Cinefantastique's bread and butter. As valuable and entertaining as these studio produced docs can be, I do miss being able to hold a physical magazine in my hands that specializes in substantial genre journalism. 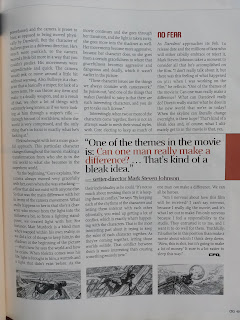 It may be the pull of nostalgia that makes me miss that experience but sentiment aside, I do think it improved our appreciation of movies - whether those movies be good, bad, or mediocre (and CFQ covered all types with equal weight) - to really read about them, to sit for an extended period of time and absorb a well researched article rather than to just react to tweets scrolling past our timelines.
Posted by Jeff Allard at 10:00 AM