Djinn, No Chaser: Wishmaster at 25 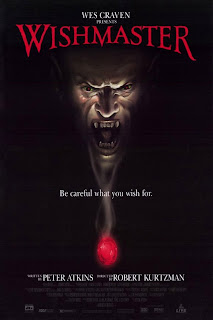 The search for the next horror superstar continued in earnest throughout the '90s. The old guard of Freddy, Michael and Jason saw their fortunes flagging during that decade but the promise of finding another character that could deliver the same kind of impact and spearhead a successful franchise led studios to keep trying, undeterred by failure. Audiences, though, for the most part kept refusing to grant the wish of filmmakers who hoped they had the next Freddy on their hands.

When Wishmaster arrived on September 19th, 1997, the horror genre was in the most robust state it'd been in some time. In '96, Scream had given the genre its biggest, buzziest hit in ages and studios were looking to cash in on the renewed appetite for horror. For the most part that meant a new wave of teen slashers, with movies like I Know What You Did Last Summer, that were directly chasing after Scream's audience with hot young casts and hip attitude. Wishmaster, however, was an FX-heavy '80s throwback designed to appeal to the dyed-in-the-wool horror base. There was nothing hip or post-modern about Wishmaster. Embracing sincerity rather than irony, it was a movie for horror nerds, by horror nerds. 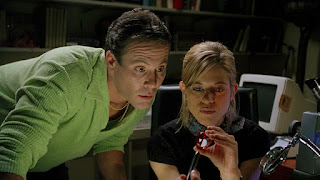 Every department of Wishmaster was occupied by seasoned genre vets. The script was by Hellraiser sequel scribe Peter Atkins. Robert Kurtzman (the "K" in hot FX house KNB) was directing. It was produced by Pierre David, who had previously produced Cronenberg classics like Scanners and The Brood. Wes Craven, with his name having renewed box office cachet since Scream, was on board as executive producer and Friday the 13th composer Harry Manfredini provided the music. If you were a horror fan in '97, it was easy to feel confident that Wishmaster was going to be speaking your language. This wasn't going to be some cynical, trend chasing horror effort. It was made by the kind of people who, like you, were always into the genre through thick and thin. 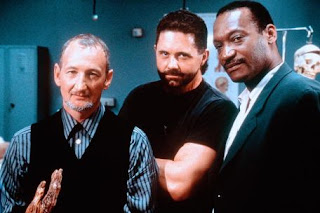 When you have the Tall Man himself, Angus Scrimm, delivering the first words spoken in your film (via voiceover narration for an opening text that explains the Djinn), you're playing to a very specific audience. Then you add in cameos by Kane Hodder, Robert Englund, Tony Todd, Ted Raimi, Joe Pilato and Reggie Bannister and you're looking at the guest roster for a Fangoria Weekend of Horrors convention. Wishmaster was pitched to a certain crowd but, to its credit, it didn't take that audience's interest for granted. Wishmaster is more than just fan friendly shout outs. 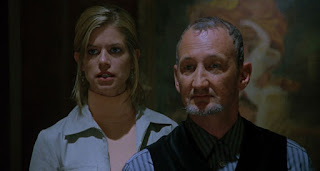 Atkins' script is not the kind of screenplay that wins mainstream accolades but it knows how to meet the demands of the genre and it does so smartly. Kurtzman's direction is workmanlike but capable and he gets the most out of Wishmaster's big set-pieces. The FX by KNB are of their usual high quality and it is, to no surprise, a strong showcase for them with the Djinn getting to cause all kinds of chaos. It's the kind of FX extravaganza that would have fit in perfectly in the '80s with a lot of prosthetic work, minimal CGI, and somehow it miraculously earned a R from the MPAA. For horror fans in the late '90s, Wishmaster provided the kind of ride that was rare in that era. 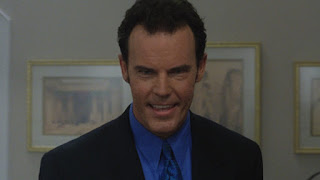 As the titular menace, Andrew Divoff (Graveyard Shift, Air Force One) really goes for it. He is not striving for a vibe of understated menace here. No, he's taking big swings with every line. But when those lines are of likes of "Run, insect! Run and tell those you will, what you will Tell them there is something loose in their city that feeds on wishes!" that is the only correct choice. In a film where he's sharing the screen with Freddy, Jason and the Candyman, Divoff makes a convincing case that the Djinn belongs in their company. Giving him a leg up, KNB provides Divoff with a memorable look for him in his Djinn form. Facing off against him is Tammy Lauren as Regal Auctioneers appraiser Alexandra "Alex" Amberson. Mostly known as a TV actress then, Lauren makes for a smart, resourceful heroine. It's somewhat surprising, actually, that she didn't have more genre roles after this. She gives Alex the kind of resiliency that's comparable to classic horror heroines like Laurie Strode and Ellen Ripley. 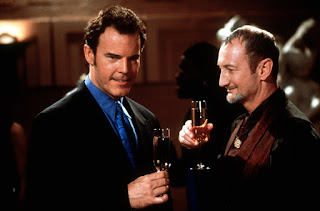 Wishmaster was not one of the bigger genre hits of its day but it did well enough to spawn a run of direct-to-video sequels (with Divoff only returning for one more entry). When Wishmaster was released, the Djinn instantly became a member of that '90s horror franchise crew that included the Leprechaun and Warlock. None of them ever became the household names that Freddy or Jason were but yet they still racked up a few movies and earned followings of their own. Fans might have wanted to wish for more for the Djinn but, as Wishmaster taught us, sometimes it's better to be satisfied with what you've got.
Posted by Jeff Allard at 6:49 AM