One Man Can Make a Difference: Knight Rider at 40 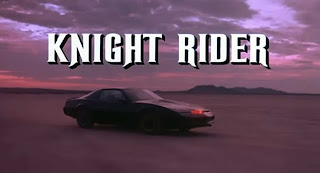 Today's pop culture landscape is saturated with superheroes in film and TV but that was not the case in the early '80s. Larger than life heroes were relatively few and far between back then. You had plenty of action heroes, sure, but as far as heroes that met the "super" criteria, not so much. Whether Michael Knight fell into that category may be debatable to some but I say he qualifies. Sure, he was not a superpowered mutant, he wasn't bit by a radioactive spider, and he didn't even have a colorful costume. What he did have, however, was a car. The Knight Industries Two Thousand, to be specific. Beginning on September 26th, 1982, to the beat of one of the greatest synth themes of the '80s, Michael Knight rode into adventure behind the wheel of K.I.T.T., the talking automobile that was a four wheeled scourge of crime. 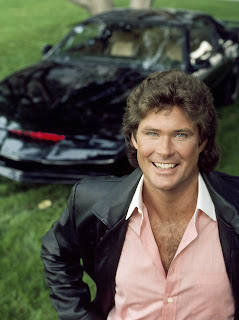 Michael and K.I.T.T. (voiced to dry perfection by St. Elsewhere actor William Daniels) worked under the direction of F.L.A.G., the Foundation for Law and Government (Knight Rider was a show that loved its anacronyms!). Even though Michael was just a regular guy, being partnered with K.I.T.T. gave him an edge in the fight against criminals who operate above the law. Just as the Lone Ranger always counted on his trusty steed Silver to carry him in a flash to wherever his help was needed, Michael relied on K.I.T.T.'s unmatchable horsepower to make him the fastest force for good on the streets. Described in the show's opening narration as "a young loner on a crusade to champion the cause of the innocent, the helpless, the powerless," Michael Knight was as devoted to helping the underdogs of the world as any masked avenger.

He didn't have any powers to call his own but Michael putting K.I.T.T.'s abilities into action each episode, most often by activating the Turbo Boost function that would send K.I.T.T. flying over any obstacle, gave Knight Rider its superhero flair. Some might argue punching a button doesn't qualify as a real skill, much less a super one, but hey, not everyone would know when to hit it. It's not just about hitting a button, man, it's about the timing. For all the technology he's pimped out with, K.I.T.T. is only as good as the guy driving him. 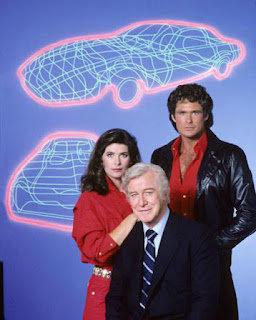 Like any good superhero, Michael had an origin story (an L.A. cop named Michael Long who was left for dead after being betrayed and shot, he was "reborn" under the care of Knight Industries and given a new face and new identity) and a motto that drove him in his pursuit of justice ("One man can make a difference," the words of his late benefactor Wilton Knight). He also had a Nick Fury-type boss in the form of F.L.A.G. leader Devon Miles (Edward Mulhare) to give him assignments (no, Devon wasn't a Fury style bad ass but he was the guy giving the orders). He also had his own Q type figures with tech wizards Dr. Bonnie Barstow (Patricia McPherson) and April Curtis (Rebecca Holden) who he relied on to keep K.I.T.T. running. 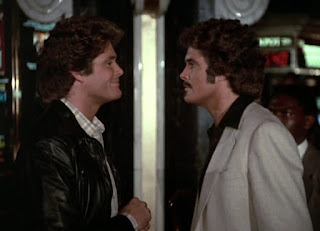 Michael even had an evil double, Garthe Knight, that served as his nemesis as did K.I.T.T. (the wicked K.A.R.R. - Knight Automated Roving Robot). The fact that Michael and K.I.T.T. had legit arch enemies to face off against is more than comic book legends Spider-Man or The Incredible Hulk could lay claim to in their own live action TV adventures of that era so I say Knight Rider is more than fit to be mentioned in their company. If Tony Stark is a superhero because he wears a high tech suit of armor, then Michael Knight is a superhero with a suit of armor that he just happens to drive. 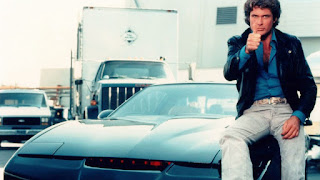 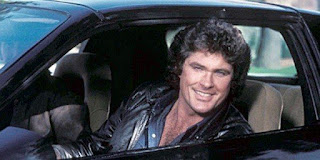 While David Hasselhoff's acting prowess is seldom, if ever, acknowledged, I say with no irony or snark that he deserves considerable credit for selling the relationship between Michael and K.I.T.T.. There are a lot of world class actors who couldn't have made a friendship between a man and his talking car work the way that Hasselhoff did so I think it's unfair for people to dismiss it as unchallenging work. Not everyone could do it, is all I'm saying. You never doubted that these two were best buds, travelling together down the actual and metaphorical road of life. Forty years later, that "shadowy flight into the dangerous world of a man who does not exist" remains a ride worth taking.
Posted by Jeff Allard at 8:56 PM