Scenes from a Marriage: Hellraiser at 35 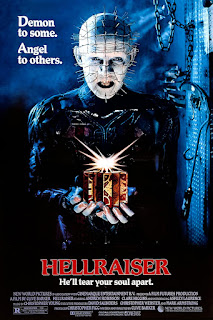 Typically when a low budget horror film becomes a box office hit, it immediately spawns a wave of imitators. Movies like Night of the Living Dead and Halloween appear so easy to emulate (even if it proves deceptively difficult to actually do so) and the returns on their modest investments are so massive that their success initiates a rash of opportunistic copycats. That was not the case with Hellraiser, however. A low budget sensation in the tradition of other scrappy horror hits, it was so singular in its vision that it did not provide any ready made template for would-be imitators. Even trying to turn Hellraiser into a franchise has proved to be, at best, fitfully uneven. The thing is, there's just nothing else like Hellraiser. Even though there is an underlying mythology to it, it has not been easy to carry that mythology forward into other films and the experience that the original film provided has proved too elusive to duplicate. 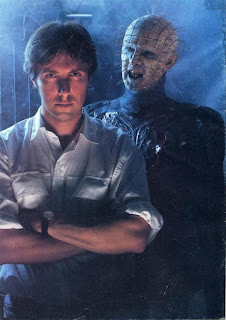 Released in the US on September 18th, 1987, Hellraiser saw writer Clive Barker finally taking the reigns of the movie adaptations of his work after the frustrating failures of Underground (1985) and Rawhead Rex (1986), with him writing and directing this adaptation of his novella "The Hellbound Heart." In stark contrast to the derision that Stephen King's efforts were met with when he stepped up to show 'em how it's done, directing the feature adaptation of his short story "Trucks" with 1986's Maximum Overdrive, Hellraiser was immediately greeted as a work of dark splendor. 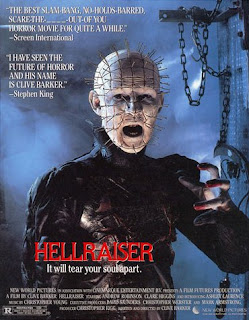 Depraved, disturbing, filled with unique, unsettling imagery, and wholly the product of its creator's vision, Hellraiser saw Barker showing the same command of the genre in film as he had in the literary world. The famous quote from Stephen King that trumpeted the arrival of Barker when Books of Blood was first published, "I have seen the future of horror and his name is Clive Barker" seemed to be proven all over again. There was a confidence to Hellraiser that marked Barker as not just a writer to watch but now a filmmaker too. 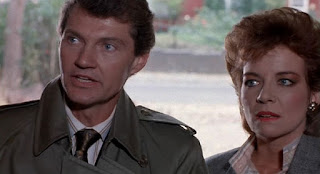 Even though it was filmed under the grindhouse-y working title of Sadomascochists from Beyond the Grave, Hellraiser is as much devoted to charting the downward spiral of a failed marriage as it is to providing exploitation thrills. While the Hellraiser sequels put an emphasis on the anticipation of waiting for someone to start playing with the Lament Configuration and ring the dinner bell for the Cenobites, Hellraiser is more concerned with the broken marriage at its center and about the sick lengths a woman will go to for her lover. 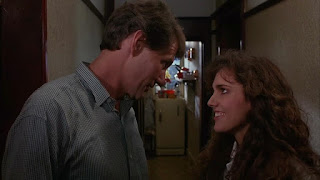 Even though Ashley Laurence as teenage Kirsty Cotton has the Final Girl role in Hellraiser, it's Clare Higgins as her (evil) stepmother Julia and Andrew Robinson as Kirsty's dad Larry, along with Sean Chapman as Larry's brother Frank, that drive the movie. Even the Cenobites are merely background players here to the drama between this unhappily married couple. We see Larry moving himself and Julia back into his long empty family home as Hellraiser begins, in the hopes that a new start will be the fix they need to repair their relationship. 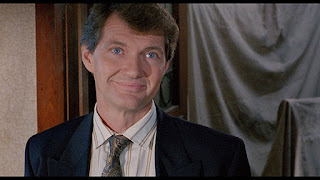 As they settle in to their new digs in London (New World Pictures wanted American audiences to think that the movie takes place in the US but it's so unmistakably set in the UK), Larry is unaware that years earlier, just before their marriage took place, Julia had an affair with his brother Frank. 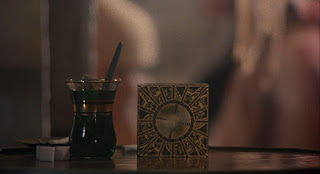 Larry also doesn't know that Frank had purchased a puzzle box known as the Lament Configuration that, when used by Frank, invited those far out freaks known as the Cenobites to tear his flesh apart, sending Frank to hell. When Larry cuts his hand on a nail while moving a mattress upstairs, his blood splashes on the floor of the attic where Frank met his fate, leading to Frank to start his tortured journey back to the land of the living. 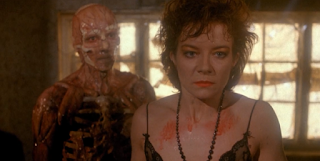 Even though he's skinless, Julia's desire for Frank is undiminished. Frank tells her that he needs more blood to restore himself and before long, she is luring men to the house while Larry is at work and bludgeoning these poor saps with a hammer to soften them up for Frank. Sometimes she kills them out right, other times Frank jumps in to finish them off himself but in all cases, they're sucked dry by Frank (played in this form by Oliver Smith). 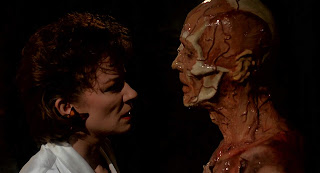 Julia's afternoon murder sessions are contrasted with Larry's sad efforts to hang on to a marriage that he thinks can still be saved ("We can be happy here," Larry says to her early on as they prepare to move in to the new place). Larry could have easily been played as an object of derision, this oblivious, cuckolded man who can't satisfy his wife, but Robinson is able to make him sympathetic. While he is no doubt unhappy in his marriage himself, Larry is determined to stick it out and is earnest in his efforts to make it work. He isn't able to be the lover that Julia wants but, to be fair, Julia's needs are way out of Larry's range. He might be open to trying new things to spice up their marriage but he's never going to match Frank's game. He's not going to beat the bedroom moves of a guy who gets off on having his skin flayed by demons. 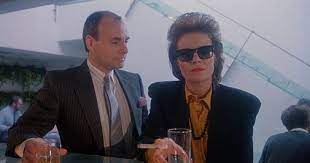 For her part, Higgins is wonderfully wicked as Julia. It's one of those performances that, had it not been in a genre film would have received Oscar consideration. This could have easily been a one-note role but Higgins is able to make Julia more than just an evil bitch. While she isn't justified in her actions, Higgins is able to convey the lust and longing that drives her and her desire to be truly fulfilled. She will cross any line for Frank, with no care for the consequences. Larry's dogged loyalty to Julia will not spare him from a cruel fate. 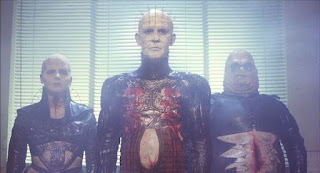 Once Julia and Frank have not just disposed of Larry but Frank has inhabited his dead brother's skin, Hellraiser moves into its climatic third act and all the cards are turned over as Kirsty has come in contact with Frank's old party pals, the Cenobites and she has no hesitation in dropping a dime on Frank. As for the Cenobites, as imagined by Barker and brought to life by FX artist Bob Keen, they are just about the greatest ghoul gang in horror. What a sight they are. Their combination of elegant ghastliness and morbid beauty is unique to them. Right from the start, they were instantly iconic, with Doug Bradley's performance as the Cenobite Soon To Be Known As Pinhead conveying a real sense of majesty. The gravitas Bradley brought to his role made it clear that the Cenobites were not going to be jump scare monsters. They were going to simply arrive and command your attention, not lunge into the frame to startle you. Composer Christopher Young's score provided the perfect assist in that regard, with its lush romanticism. 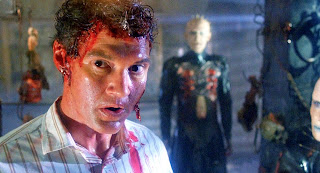 Usually movie monsters are kept hidden and only slowly revealed. Filmmakers keep them cloaked in darkness, show their shadows on the wall, reveal only fleeting glimpses. The strategy is to show as little as possible as long as possible and to let the audience fill in the details with their imagination. But Barker doesn't bother with that. He shows off his Cenobites with pure presentational flourish, letting us savor every (literal) pain-staking detail of their twisted but precise designs. And when these suckers finally get their hooks in Frank, oh my.

As the restored Frank, Robinson's malevolence is pitch perfect (it's too bad he couldn't have returned to continue his villainy in Hellbound) and the moment of his comeuppance is an all-timer. Not just for the way that his head is ripped apart but more so for that unscripted last line of "Jesus Wept" that was entirely Robinson's suggestion. The way he savors these words as Frank's skin is pulled apart nails (pardon the expression) the character's devotion to pleasure through suffering. 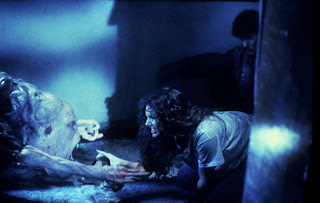 Kirsty's subsequent escape from the Cenobites, as she sends them back to Hell one by one, is the closest Hellraiser comes to delivering conventional funhouse style thrills. Amusingly, the Cenobites aren't much of a real threat to Kirsty here. It's more a matter of Barker just wanting his Cenobites to linger on the stage a little longer and to give each of them a final curtain call. Pinhead is the first to leave the party (a clear indication of how little stock Barker put in his Lead Cenobite) and the only Cenobite that seems kind of dangerous, Butterball, is comically taken out by debris clonking him on the head just as he is about to bury a knife in the back of Kirsty's boyfriend Steve (Robert Hines). 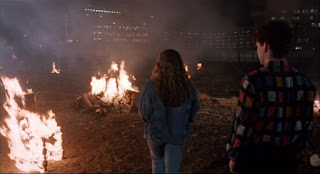 The real story that Barker was telling in Hellraiser was about Frank and Larry and Julia and once he brought that to its conclusion, everything after is just played for fun. To that end, Barker delivers a final scene of unfettered nonsense in which Kirsty disposes of the puzzle box in a trash fire burning in a vacant lot only to have the sinister vagrant that has been lurking on the periphery of the movie shamble forth to claim the box from the flames, catch on fire, and then turn into a horned, skeletal dragon and fly away. It is the greatest WTF ending to a horror movie since the Incubus came out of nowhere in Wes Craven's Deadly Blessing. 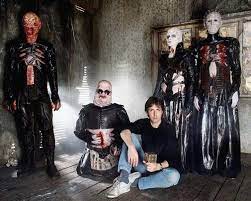 For a while after the release of Hellraiser (all the way until Nightbreed's release in 1990, really), Barker looked like a lock to join the esteemed ranks of Romero, Craven, Carpenter and Hooper as a modern Master of Horror but Barker's post Hellraiser directing career proved to be as doomed as Julia and Larry's marriage. The blame for that lies with incompetent studio execs rather than with Barker but whatever the cause, the end result was still that while he went on to make two more interesting, if flawed, films, Barker never fulfilled the directorial promise of Hellraiser. But man, what a movie it is. Thirty five years later it still has the ability to sink its hooks into viewers.