The Bond Identity: Die Another Day at 20 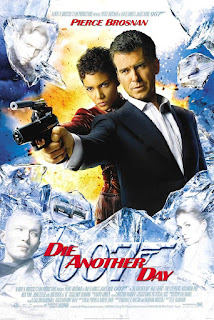 As someone who remembers how popular Pierce Brosnan's Bond era was while it was happening and how celebrated it was for re-energizing the franchise, it is a curious thing to see how fashionable it's become to disparage it. When Brosnan arrived, his Bonds were seen as rescuing the series from the missteps of the two Timothy Dalton Bonds. With the popularity of Craig's darker, edgier 007, though, suddenly the Dalton Bonds found a belated appreciation and Brosnan's slicker, more crowd pleasing entries, which were once viewed as a much needed course correction for the series, fell out of favor. While I do agree that the Dalton films were worthy of rediscovery, I think the Brosnan era is still terrific fun and that it represents a style of Bond that may never come again. Twenty years ago today, on November 22, 2002, that era came to an abrupt - and some say ignominious - end with Die Another Day. 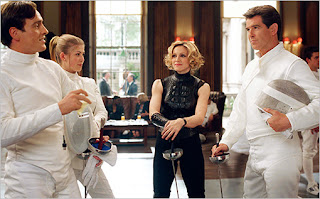 Unlike Craig's swan song, No Time To Die, Die Another Day was not announced in advance as being the final Brosnan Bond. At the time, it was just another hotly anticipated entry in a run that, with each new film, had improved on the box office performance of the last. The 20th Bond film (when Q issues Bond a new watch, he says "This should be your twentieth, I believe."), coinciding with the series' 40th anniversary, Die Another Day had the celebratory feel of a greatest hits package. Every aspect of the franchise was touched on, from the grittier feel of License to Kill and For Your Eyes Only to the over the top camp of Moonraker. 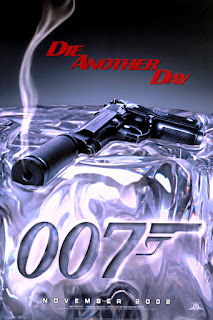 Directed by New Zealand director Lee Tamahori (Once Were Warriors), Die Another Day became the highest grossing Bond film up to that point. The screenplay by the duo of Neal Purvis and Robert Wade, who had written Brosnan's previous entry, The World Is Not Enough and who went on to write, or co-write, all the Craig Bonds, sends Brosnan's 007 up against Colonel Tan-Sun Moon (Will Yun Lee), of the North Korean army, who was believed to be killed during a pre-title sequence conflict with Bond but who survived and subsequently changed his identity and, more improbably, his appearance (by means of a gene therapy clinic) to that of white British dude Gustav Graves (Toby Stephens). As Graves, Moon is a Richard Branson-esque British billionaire whose enormous wealth came from discovering a vein of diamonds in Iceland.

At his spectacular ice palace in Iceland, Graves unveils a new orbital mirror satellite he's dubbed 'Icacrus' that can focus solar energy on small areas, providing sunlight for agriculture. Bond eventually discovers Graves' true identity as well as the true purpose of Icarus - to use concentrated sunlight to slice a path through the Korean Demilitarized Zone and allow North Korean troops to invade South Korea and unite the peninsula. 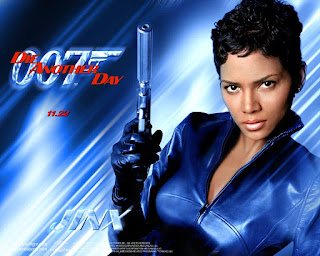 With the help of NSA agent Giancinta "Jinx" Johnson (Halle Berry), Bond has to take out Graves and his right hand man Zao (Rick Yune) and put an end to their plans. Luckily for Bond, aside from Jinx's assistance, he has an invisible car - an Aston Martin Vanquish (or, for Bond's purposes, the "Vanish") - courtesy of the new Q (John Cleese) to give him a winning edge. 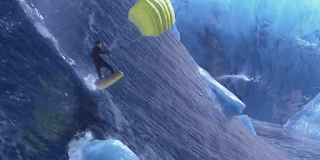 With The Bourne Identity having been released months earlier, in June of '02, Die Another Day was viewed negatively by some in light of the stripped down style of action that Bourne had popularized. Such elements as the Vanish or Bond kite-surfing across an arctic tidal wave were seen to mark Bond as an out of step camp relic in what was shaping up to be a more tough minded era for action heroes (you wouldn't catch Jason Bourne driving around in an invisible car). Twenty years later, I say that its absurd qualities are what make Die Another Day enduringly entertaining. More than that, they now make it feel like a current action film in a way that The Bourne Identity no longer does.

Given the direction that the action genre has gone in, with the one time street racers of the Fast & Furious franchise now launching themselves into space, the over the top nature of Die Another Day now feels in tune with today's action cinema (no one would blink an eye if an invisible car were to show up in a F & F movie - in fact, they'd cheer it). Post 9/11, movies like The Bourne Identity fed into an appetite for a more somber approach but audiences have long since rediscovered their joy of the ridiculous. Ironically, in 2022 it's now The Bourne Identity that looks dated while Die Another Day is prepared to give the people what they want.

What appeared in 2002 to make Die Another Day look obsolete in a less frivolous action landscape is now what makes it look timely. As a movie that not only features kite surfing across collapsing glaciers but also a car chase inside of a melting ice palace zapped from above by space lasers and a final one on one battle (inside of a careening, disintegrating cargo plane) with a villain suited up in robotic, electrified armor, Die Another Day may not have been the Bond some wanted in 2002 but he's got all the right moves for 2022. 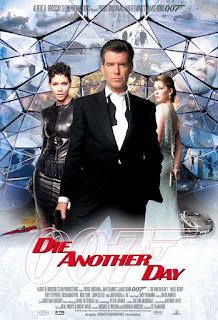 Too often dismissed as a series low point, I say Die Another Day should be regarded as an example of the Bond series doing what it used to do best, serving up spectacle and escapism on a level that few could hope to match. The Bourne Identity may have led some to accuse Bond of being passe but to watch Die Another Day twenty years later is to see a movie that had no identity crisis of its own.
Posted by Jeff Allard at 8:55 PM