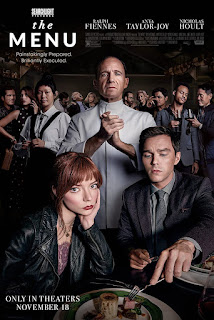 I'm always welcome to hearing that rich people are shallow assholes but if you already agree with that point of view, The Menu doesn't offer much else to chew on past that. It unfolds at a steady clip, though, it doesn't dawdle (thumbs up for the well under two hour running time), it occasionally surprises in wonderfully nasty ways, and the cast is top notch. I do think, however, that if you start pulling on the threads of its narrative it quickly starts to fall apart. There's a lot of suspension of disbelief that has to happen here. Without giving any spoilers, I would just say I wasn't convinced that Ralph Fiennes' kitchen staff would be as, let's say, dedicated as they are and the whole movie hinges on whether you can believe it. I can buy the fact that Anton Phibes had one assistant that, for whatever reason, was so maniacally devoted to him that they would go along with facilitating his murderous revenge schemes but do I think that an entire restaurant staff would be willing to go all in on what Fiennes' character has planned here? No, I don't. No matter what grudges these people might have towards the one percenters that they serve, I don't think that every one of them would be willing to go as far as Fiennes is asking them to. Director Mark Mylod, working with Seth Reiss and Will Tracy's script, tries to sell this aspect of the story by making it clear that the staff is more like an obsessive cult than a group of professional cooks but I still think it's an awfully big ask. Ultimately, for The Menu to work you just have to shrug and go along with it. Luckily, the events of The Menu are entertaining enough where it's easy to enjoy what's on the plate without picking apart the ingredients. 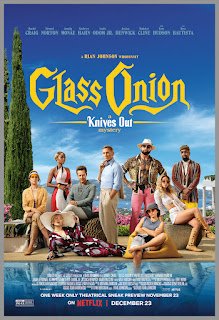 Having just watched The Menu days earlier, I found it a little difficult to warm up to Glass Onion at first. As soon as it began, I thought "Oh God, here I am at another movie filled with unlikable rich assholes." Once it got going, though, it became very easy to put The Menu out of mind and enjoy the delights of Rian Johnson's relentlessly clever sequel. I haven't watched Knives Out since the theaters so I can't really compare the two movies but I do remember walking out of Knives Out hoping that Johnson and Daniel Craig had many more mysteries for Benoit Blanc to solve and I walked out of Glass Onion feeling the same way. If the quality can stay this high, I hope this franchise will go on for decades and keep pairing Blanc up with all-star casts in new settings. Shame on Netflix for not giving Glass Onion a lengthy theatrical run as this crowd pleaser deserves to be seen with a receptive audience on the big screen.

Given that there was about zero chance of James Gunn and co. dropping the ball on this, it's not surprising that The Guardians of the Galaxy Holiday Special is every bit as hugely entertaining as everyone assumed it would be. Drax and Mantis are one of the best pairings in the MCU and I love that this special is about 80% just them together on a well intended misadventure on Earth as they hunt down Kevin Bacon in order to give him to Peter as a gift to renew his Christmas spirit. It's hilarious, it's heart-warming and of course it has an impeccably chosen holiday themed soundtrack. In the terminology of the MCU, this is called a Special but in comic book terms, this would be analogous to an Annual, a single issue that can be enjoyed without following the main title. Just as the publishing arm of Marvel is able to cater to fans who are more invested in following every appearance of their favorite characters and the casual readers who occasionally dip in with Annuals and one-shots, the MCU is well positioned with their Disney+ series and specials to serve the needs of both the MCU diehards and those who have a more passing interest in the Marvel U. 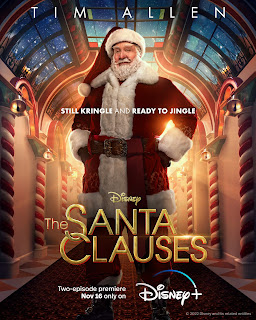 I had no intention of watching this but I gave the first episode a shot just to kill some time and liked it enough to keep going. The original films are something that I watched with my son years ago when he was little so I have some nostalgia for them but not necessarily enough to be motivated to see this continuation. I'm really finding it charming, though. It's very much in the style of the films, both in the aesthetics of the world (I like how it seems to hail from a pre-CGI era with physical sets and handmade props) and in its sitcom level tone of humor. Given Tim Allen's increasingly conservative real world political bent, I was worried that this would be filled with a grouchy, anti-woke attitude but it isn't like that.

There's one eye rolling line about "...Even saying 'Merry Christmas' has become problematic these days!" but that's it and there are some actually funny bits that address the progressive changes in the world that Santa needs to adapt to like, while he's assembling his naught and nice list, an elf will interject to correct Santa that this kid or that isn't actually 'naught,' but it's just that they have ADD or whatever. I can't say that this is anything great but I will say that, against expectations, I'm actually digging it. If you have any affection for the movies, or if you just want some light 'n breezy holiday cheer that goes down as smooth as a glass of egg nog, it's worth a look. So far, at the halfway point, I'm giving it three out of four candy canes. 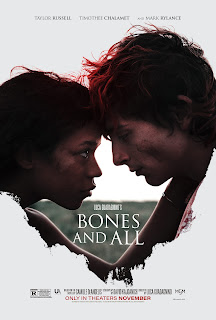 As a love story between two young cannibals (or "eaters," as they're referred to here) who roam the US in the 1980s, Bones and All very much belongs in the horror genre but it's unsettling more than it is scary. This is not a jump scare movie but it generates many shivery, queasy moments and its haunting vibe lingers long past the end credits. Filled with unease from the start, Bones and All's protagonists wander from one bleak situation to the next, all while trying to understand and control their impulse (while sometimes indulging them). They occasionally encounter others of their kind but these brushes with scattered members of their tribe never offers them a reason to feel hopeful for the future. Often in the horror genre, discovering that you're part of a secret society is presented as an empowering experience. Even if being, say, a vampire has its downsides, it's usually portrayed as, if not a step up from being human, then at least an attractive alternative. Not here. What I found most interesting about Bones and All is that being an eater is always depicted as a gross way to live.

Vampires can be feral but there's always that element of aristocracy to them. All the way back to Dracula wearing a cape and tux, first on stage and then in the Bela Lugosi film, the idea of a "classy" side to the vampire life has long been established. Eaters, however, are disgusting. Their cannibalistic hunger is depicted as a gross way to live and every adult that's been doing it for awhile is shown to be a sad, creepy mess. There's not an ounce of glamour to being a monster here. There's a wider mythology that's hinted at with such supernatural touches as eaters having the ability to smell each other, even sometimes across vast distances, but the focus stays on Taylor Russell and Timothee Chalamet's characters and their immediate problems rather than exploring all the whys and hows of eaters. Even though it's set in the '80s (with some era-specific needle drops, although oddly enough, not a single Fine Young Cannibals track!), Bones and All feels far more evocative of the esoteric, melancholy horrors of the '70s.

Email ThisBlogThis!Share to TwitterShare to FacebookShare to Pinterest
Labels: Bones and All, Glass Onion, The Guardians of the Galaxy Holiday Special, The Menu, The Santa Clauses